Whether you like it or not, global warming is for real. All of us are literally facing the scorching heat due to the collective injustice we have done to this planet earth, first and foremost by cutting down trees. As a part of its Corporate Social Responsibility initiative, SHPL plans to create massive social awareness about the need to nurture the existing ecosystem. It also has specific action-plan to plant thousands of trees by partnering with like-minded associates. As a responsible wellness organization, SHPL is dedicated to preserve Mother Nature to help all of lead a natural life.

To preserve this planet earth as a better place to live in, trees are vital. Trees and plants create an ecosystem to provide habitat and food for human beings, animals and birds. They make oxygen that helps us stay alive. They store carbon, reduce ozone layers, stabilize the soil and give life to the world's wildlife, apart from providing us with the materials for tools and shelter. Their ability confiscates carbon helping it remove carbon dioxide and other greenhouse gases and ozone from the air, which cools the earth. One large tree can supply a day's supply of oxygen for four people.

But, what have we done today, in the name of urbanization and development?

Destruction of plants, trees and forests have created numerous environmental catastrophes, including altering local rainfall patterns, accelerating soil erosion, causing the flooding of rivers, cracks in the ozone layer, global warming and threatening millions of species of plants, animals and insects with extinction. The main causes of deforestation are expansion of agricultural and industrial needs, population growth, poverty, consumer demand and landlessness. Despite increased public awareness and a large number of initiatives, deforestation is still continuing in most of the world including India.

Did you know this? There are about 20,000 tree species in the world. India has one of the largest tree treasuries in the world followed by the US. California Bristlecone Pines and Giant Sequoias are regarded as the oldest trees and have been living since 4,000 to 5,000 years. Trees grow from the top and not from the bottom as is commonly believed and they receive an estimated 90% of their nutrition from the atmosphere and only 10% from the soil. 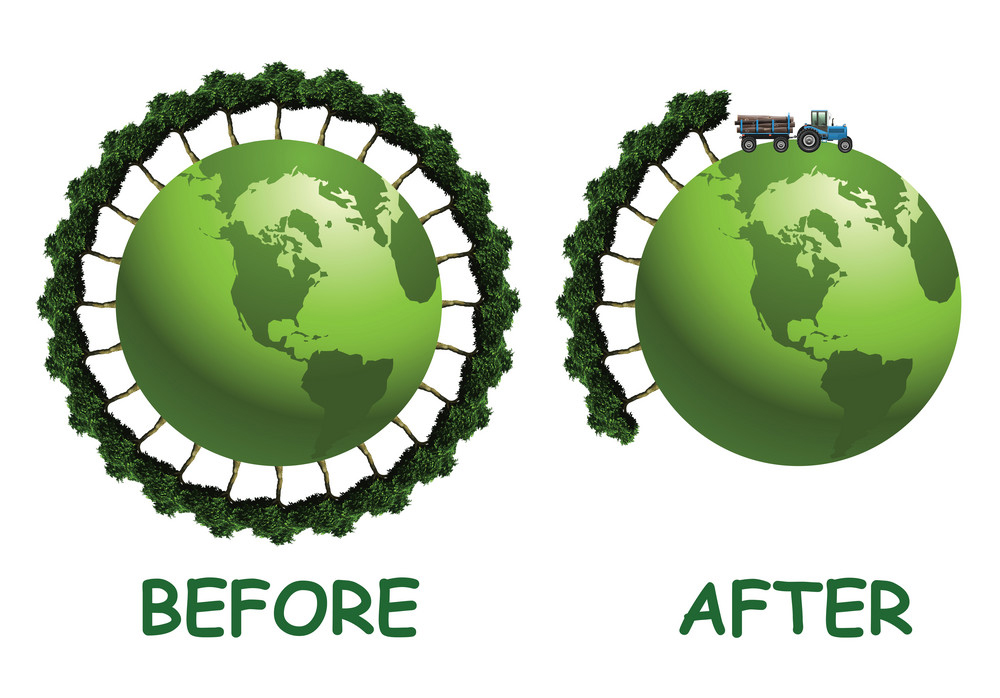 Approximately 45% of India's land is degraded. India has the 10th largest forest cover (23%) in the world at 68 million hectares. In spite of rich biodiversity with more than 45,000 plants 10% flora and fauna are on the threatened list and many are on the verge of extinction. Cutting down forests is contributing almost 20% of the greenhouse gases entering the atmosphere. India contributes 5% to global CO2 emissions. So, to make up for the loss of trees in the last decade, the world would need to plant trees over an area of 130 million hectares. This would entail planting 14 billion trees every year for 10 consecutive years, i.e., 2 saplings for every person on Earth. Well, they say the best time to plant a tree was 20 years ago. The next best time is now. At SHPL, we will be in action soon.

Have you been a blood donor ever? If YES, how many times have you donated blood?

Meet Dinesh Shetty, a young gentleman from Shivamogga District of Karnataka. In February 2016, he donated blood for the 50th time in his life and set an inspiring example for others to follow. The Red Cross society felicitated him for his extraordinary humanitarian contribution. Well, if Dinesh can donate blood 50 times, can’t we donate blood at least once?

Blood is our lifeline that can be given to needy people if we have the willingness to donate.It is one of the most precious gifts that a person can give to another person. Genuine love of fellow humans and a sincere desire to share selflessly is what differentiates a blood donor from the others. As a part of its Corporate Social Responsibility, SHPL shall conduct a series of blood donation camps pan India. Specific details of this campaign will be unleashed on 14 June on World Blood Donors Day. Donate blood, save lives, be healthy!

A growing body of research demonstrates that a decision to donate blood can not only save several lives but also can help improve donors’ health. Findings have shown that reduction in iron levels in the body is linked with low cancer risk and is beneficial in reducing risk of heart and liver ailments. It even burns 650 calories for every pint given.

Thanks to better awareness levels, India has made significant progress in its blood requirement in the recent past. Though India has 2760 blood banks, it still faces 10% deficit. Every day thousands of people require blood for a transfusion, surgery or some emergencies. Statistics show that there are 234 million major operations in India, 63 million trauma-induced surgeries, 31 million cancer-related procedures and 10 million pregnancy related complications which require blood transfusions. Emergencies occur every minute. So, blood is needed every minute.

Why does a county of 140 Crores population lacks blood donors? Well, primarily due to a lot of myths and misconceptions surrounding blood donation. Most of the people still believe that donating blood may result in weakness. There are also myths that it could lead to infections including HIV as adequate attention may not be paid on hygiene and safety or people with high cholesterol, diabetes or hypertension or people on medication cannot donate blood. All these myths can be removed only by creating adequate awareness and eradicating misconceptions.

The fact is donating blood is safe and simple and it takes just about 15 minutes to complete the blood donation process. The fact any healthy adult aged 18 to 60 can donate blood every 3 months. Our body recovers 100 percent blood after donation. For instance, if someone begins donating blood at the age of 18 and donates every 90 days till the age of 60, he/she would have donated 30 gallons of blood potentially helping save more than 500 lives and importantly to him/her too. With new antiseptic precautions chances of any infection and other issue is negligible.

What can you expect when you are ready to donate blood?

You walk into a reputed and safe blood donation centre. Usually, you will be asked to fill out a short form or a few questions will be asked to determine your health status. A quick physical check will be done to check temperature, blood pressure, pulse and haemoglobin content in blood to ensure you are a healthy donor. Once found fit to donate, you will be asked to lie down on a resting chair or a bed. Your arm will be thoroughly cleaned and using sterile equipment blood will be collected in a special plastic bag. Approximately 350 ml of blood will be collected in one donation. Those who weigh more than 60 Kg can donate 450 ml of blood. Then you must rest and relax for a few minutes with a light snack and a refreshing drink. Blood will be separated into components within eight hours of donation. The blood will then be taken to the laboratory for testing. Once found safe, it will be kept in special storage and released when required. The blood is now ready to be taken to the hospital to save lives.

Saarvasri insists all its business associates to voluntarily furnish their blood group and asks them if they would like to be volunteer blood donors, during free online registration. Saarvasri then issues a Digital Identity Card with their blood group mentioned on it, which they can print and carry with them. Saarvasri also would like to create an online database of voluntary blood donors and each out to those individuals who are in need of blood and connect them to those willing to donate.

Organ donation is the harvesting of an individual's organs after he or she dies, to transplantthem into another person. The person who gives the organs is called a donor and the person who receives them is called a recipient.If you think it’s an opportunity to pass on the gift of life to someone in need, you may be one of the very few people in India well-informed about organ donation. However, due to lack of awareness, various myths, death-related fear and an absence of a national registry India has one of the worst organ donation ratios in the world.

13 August is celebrated as an ‘Organ Donation Day’.Saarvasri, as a part of its Corporate Social Responsibility is committed to create massive social awareness about the need of organ donation and encourage people to voluntarily pledge organs. This way we can help save lives by increasing the organ donation rate in the country.SHPL in association with an NGO fully dedicated to organ donation in India, will initiate an ongoing social awareness shortly.

Did you know? In spite of being the second largest population with 140 Crores people, India has 0.01% organ donation rate. This is an incredibly small and insignificant number compared to the statistics around the world. While Croatia has as high as 36.5% and Spain has 35.3% organ donation rate, in the USA it is 26%.

In India, there are more than half a million people estimated to be in dire need of an organ transplant every year. However, only a thousand transplants are performed each year. The rest usually die waiting for an organ as there aren't enough donors. The ‘Transplantation of Human Organs Act’ was enacted in India in 1994. Yet the gap between the number of organs donated and the number people waiting for transplant is ever increasing. The need for organ donors has never been greater.

Anyone can be an organ donor, irrespective of age, caste, religion, community, current or past medical condition. Children can also be organ donors after taking consent for organ donation from their parents. While vital organs like heart, liver, kidneys, intestines, lungs and pancreas can be donated in case of 'brain death', other tissues like corneas, heart valves, skin, bones etc can be donated in case of natural death. One person’s decision to donate his organs after his death could save up to 8 lives (8 organs can be harvested from a brain-deadperson and transplanted in 8 different people) and enhance the lives of over 50 people by way of tissue donation.

It may be difficult to think about organ donation when you have just lost a loved one. However, organ donation is a generous and worthwhile decision that can save millions of lives. For organ recipients, a transplant often means a second chance at life. Vital organs can be transplanted to those whose organs are failing. It allows many recipients to return to a normal lifestyle. For others, a cornea or tissue transplant means the ability to see again or the recovery of mobility and freedom from pain.

The act of organ donation has the ability to comfort grieving families. It is always difficult to lose a loved one. Many grieving families of organ donors draw comfort from the fact that their loss may help to save or improve the lives of others. Studies carried out to understand how a family's wounds heal have shown that the support from family members helps a person to overcome grief. The support of friends and religious and cultural beliefs also help donor families. Most of the donor families agree to donate organs because they felt that it was the only positive outcome from their loss.